You are standing in front of Edvard Munch’s painting “Vampire”. In your headphones, a female and a male voice are having a dialogue.

Woman: “Look at my arms, hugging this man. It is love!”

Woman: “He can hide in my hair. I will kiss him, and all his troubles will be gone.”

This dialogue is part of the Sensitive Pictures experience, which was created by the design company Next Game and presented to visitors at the Munch Museum in Oslo in August 2019. The experience allowed us to collect responses about emotions in different ways, in order to explore how we best capture visitors’ emotions in encounters with artworks.

The experience used the Emotion Mapper software as part of a web app (created by NextGame) that gave visitors an emotional encounter with Munch’s highly expressive paintings. The app showed visitors a list of six different emotions, each linked to one painting selected by curators at the Munch Museum. When the visitor selected an emotion – for instance, “Love” – the app would guide them to the corresponding painting, in this case, “Vampire”. There, the visitor could listen to an audio recording with a dramatic voiceover giving an emotionally charged interpretation of the painting.

Afterwards, the app would ask visitors to think of something in their own life, related to the painting: “Now think about the most intense relationship you have been in. Describe how you feel about it.” Visitors were then invited to type how they felt, using their own words. They were also asked to describe their emotion using a tool from psychological research called the “self-assessment manikin”, in which they would use three sliders to rate the quality of their emotion. After this, the visitors could explore the other paintings and emotions presented in the app. There were six emotions in total. 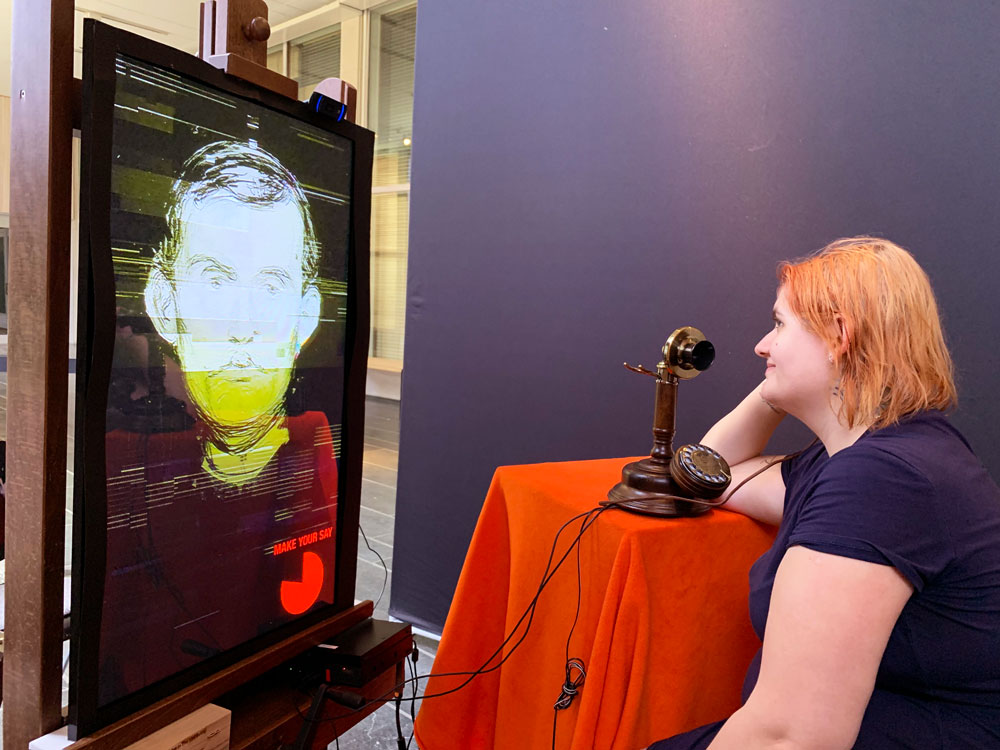 As the last step of the Sensitive Pictures experience, visitors were invited to “have a phone conversation with Edvard Munch”. The artist was presented via his self-portrait which was displayed on a television screen placed on an easel. The artist communicated with visitors via an old-fashioned phone placed on a table in front of the screen, asking them to describe their emotions in relation to one of the paintings they had encountered. The visitors’ responses were captured by a webcam connected to an emotion detection algorithm, which returned an assessment of their emotions (no actual images of faces were ever taken).

At the end of this playful encounter, visitors got a postcard showing the painting that they had the strongest emotional reaction to. On the back of the postcard was printed a visualisation of their emotional responses, paired with the results of their automated emotion recognition data.

Sensitive Pictures was trialled over four days in August 2019 with 132 visitors. On average, visitors spent 46 minutes using the app to view and respond to five paintings. They visited the Vampire painting more often than the others by a margin of between 1-18%, but the first emotion they selected – which corresponded to the Vampire – they chose an overwhelming 87% of the time!

Emotional data are highly personal. In the Sensitive Pictures trial, visitors were not only asked for their consent at the start of the experience, but were also asked at the end whether or not they would ‘donate’ their data to be used in research. Visitors who did not consent had their data deleted.