How can we 'love' museums into the future? Reflections on being a bold and innovative museum

With SFMOMA’s new strategic plan, I don’t think it’s an exaggeration to say that we have institutionalised what many SFMOMA workers, and U.S. cultural workers in general, have always desired but thought was out of our grasp—a constellation of shared values, a mission statement which is made of adjectives: empathic, passionate, inclusive, brave. I contrast this with the more traditional verb-filled mandate: collect, preserve, study, exhibit. What does it mean to be guided by adjectives? Where are we going?

My boss Chad Coerver likes to say that he is afflicted with “perverse optimism” and this strategic plan is an example of that, to me. But, is it really a plan? Is an aspirational set of values a plan, or a precursor to a plan? And how does it become a plan? And how patient should we be?

I think of the act of radical trust/perverse optimism inherent to the very thing of having a museum. In the US, there is almost no unbranded space. The public spaces of San Francisco are also zones of class combat and frisson, also public toilets and theaters of self-destruction. The totally insane becomes normal, people are necessarily disconnected and even dissociated. The museum on the other hand is another kind of place. We trust people to be respectful toward the priceless work. People speak of a peaceful feeling, of a “favourite place.” Others speak of not feeling like they belong here, not feeling like it is for them. In interpretive media, where I produced audio guides, I work to avoid the traditional top-down paternalistic tone. Instead of the fatherly museum director, we ask acrobats, priestesses, artists, writers and comedians to talk about the art they love. Through the stripped-down, unhip AR of the audio guide, we aim to reach people. To say, this is yours too.

Radical trust—we don’t check bags. We trust our visitors to behave respectfully. Until recently, the Metropolitan Museum of Art, which does check bags, let anyone into its great doors, its Great Hall, for any amount of money, even one dollar or less, so they could be in a single building which holds 5000 years of human achievement. This is yours too.

How does digital content or design play into this? By not acting alone. By not being romanced with itself—instead of what it is/what does it do, ask, what does it do for people? And holding each other to being honest.

We know the world we want to see. Maybe not exactly, but enough. We want local people to feel comfortable here. We want to explode open the canon. (Okay, we want to at least expand the canon.) We want to bring the stories to the ground floor, despite the cloud-like nature of our spacious, light filled new building. How do we do it? Our education and public knowledge department has skin in the game and boots on the ground every day. Our frontline staff soothes visitors irate for various reasons—they bought a ticket to MoMA in New York, for example, and would like free entry. In my role as Senior Content Producer, I think about a cloud of doors which can connect visitors with varied tastes and varied learning styles with artworks on view. I ask myself: Is it generous? Is it excellent? Is it interpretive? I aim to fulfil this basic trinity, a three-part north star. I think of open windows.

In the Night of Ideas, an evening-long program produced by SFMOMA’s education and public programs team in collaboration with the French consulate and the public library, a very diverse group of thinkers got together to imagine the city of the future. Dancers in white activated the dark stacks. Other dancers, hanging by ropes that I really hoped were strong, scaled the atrium. Young poets spoke fiercely of their disappearing neighbourhoods, and a drag queen sang her heart out with a giant hat which supported a glittering model of the city of San Francisco. Panel after panel told the truth. Donuts and cocktails were sold in the landing area outside the children’s room. I am sure more than one pair fell in love. Late in the night, waiting endlessly for my car like everyone else, I watched a patient security guard remind the French attendees, one after another, that smoking is not allowed in the library entrance. It was one of the least tech-centric convenings I had witnessed in memory, it was all about being together in a singular time and space. 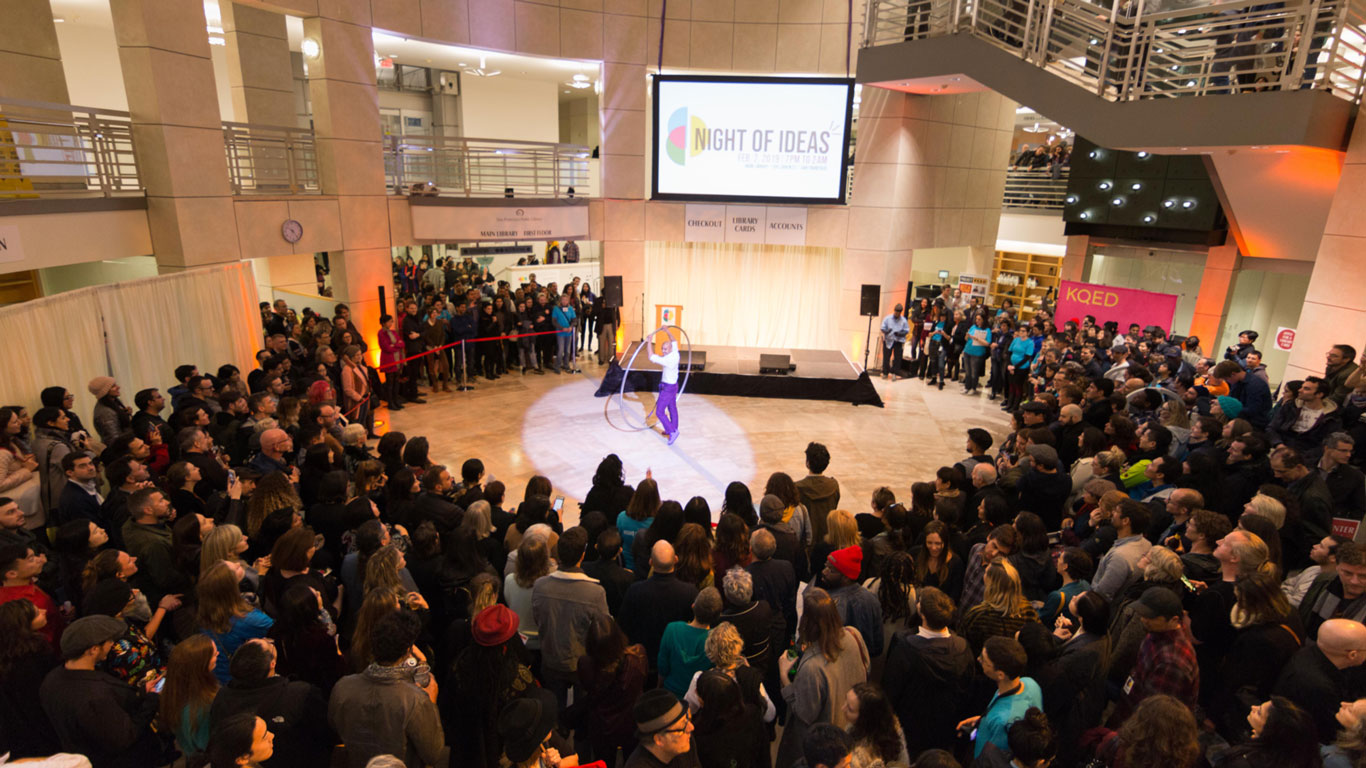 I researched this event for the GIFT Action Research, considering the question: How might we create a bold and open culture in museums, including an acknowledgement that failure is a part of innovation? I asked colleagues in education, who had produced the event and were deeply involved to reflect. Among the generous thoughts they shared were the following: 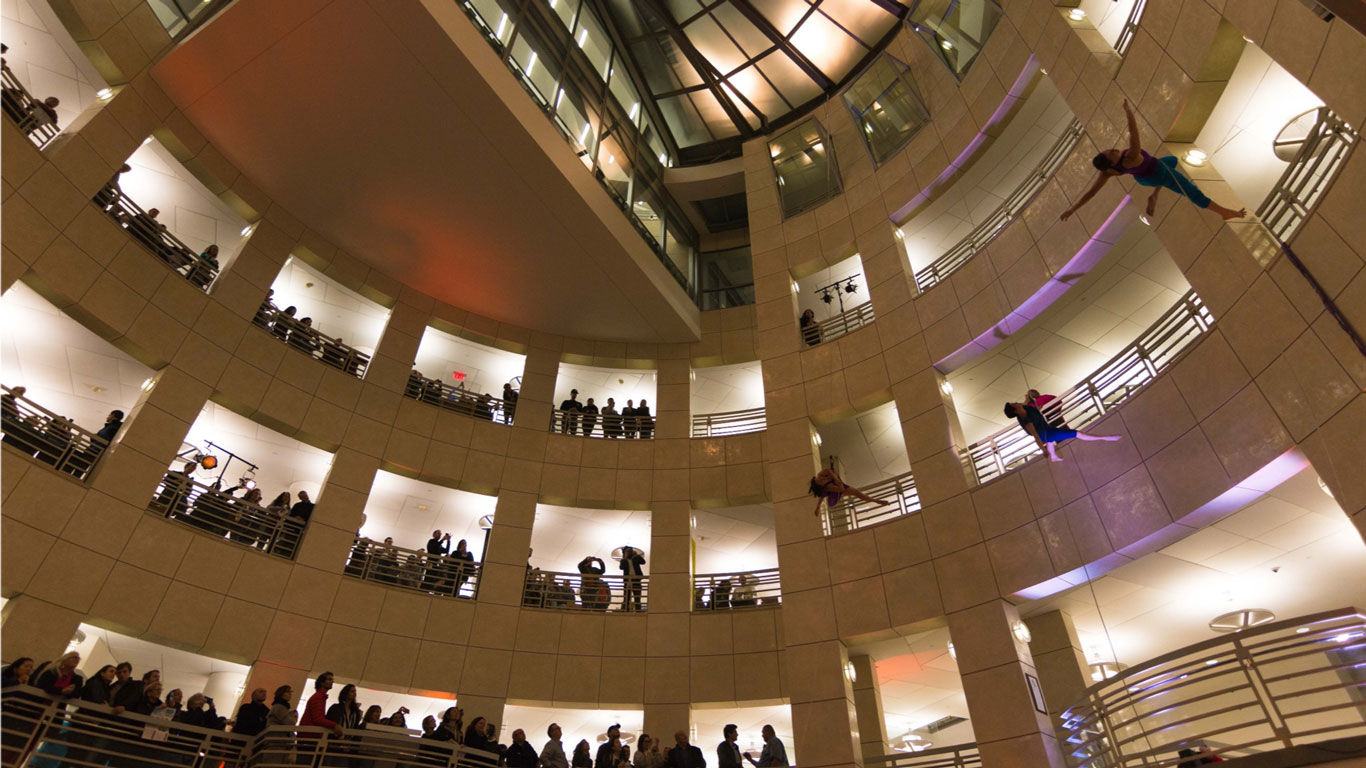 Museums are imperfect and “problematic” but they are also sites of literal transformation and connection. And just as they were formed by Eurocentric, singular and supreme histories and the energy of empire, so they can be reformed by those of us who would like to imagine another future, or who must. Passionate! Empathetic! Brave! Inclusive!

“Sounds great, let’s do it!” was the general staff reaction that I witnessed to the announcement of the strategic plans after years of development. (We do it every five years). It has been actualized in one small case in the form of a de-accession of a lesser-known 1960 Rothko, explicitly to “broadly diversify” our collection.

As an interpretive media producer who seeks to foster connection between visitor and work of art, there is always a challenge in being part of a supreme narrative—how do we operate outside of this authentically, without tokenising? The attempts can sometimes feel like we’ve caught a case of amnesia, or like we are inviting outsider voices as special guests, while still running the house. What does it mean—how does it actually happen—to dream far outside of what is currently within reach? Sounds great, let’s do it. How?

But back to the role of digital media in the present and future of museums and cultural heritage. Rather than see digital growth as metonymic for truly progressive, the more progressive thing is to take an honest stock of what digital-centric experience does for people and consider if it’s a direction that is meaningful or desirable. If that is still our dream.

Having worked in museums for 20 years, I have seen a great change from the promise of digital in museums to the more crucial promise of museum space as a respite from technology-centered living, from a kind of counterfeit togetherness into a literal one. A necessarily social and sensory space. How can we be brave? How can we be early adaptors of a more vital way of living, not just the latest gadget that ALMOST works, that WOULD work if only you knew how to use it, if only the startup that we were partnering with didn’t just get acquired, if only the genius dude who made it hadn’t JUST left for a better opportunity in the private sector?

Digital culture is both invigorating and destructive in terms of what is happening in this beautiful and beloved city, this instant city, this gold rush city always which rolls a seismic gamble with each perfect pacific sunset. How can we be decent now? How to live in reality and dream towards something else?

A truly bold and innovative culture begins by asking: what kind of world are we working towards, and is backed up by honest relationships and deep conviviality. SFMOMA, and museums and art spaces more broadly, are places to dream together.

How can we love museums into the future? Call me and tell me.